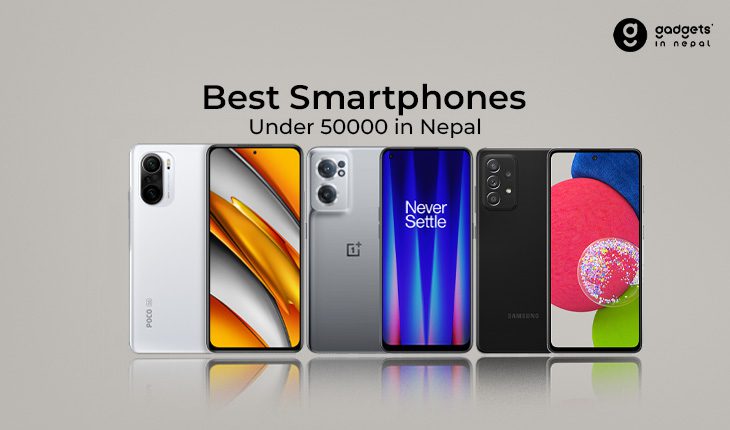 Buying a smartphone is always a headache. The midrange segment is not heated up as the budget segments. However, you have to choose the best one from the small pool of midrange smartphones. In this article, we will have a look at the 5 best mobile phones that you can buy under NPR 50000 in Nepal.

Before you make any decision to buy a mid-range smartphone, you have to keep some parameters in your mind. At NPR 50000 range, the phone must have 120Hz AMOLED or at least 90Hz panel with Full HD+ resolution and punch hole design. Also, it should feature a good primary camera and some phone provides OIS even in the midrange segment. Now, let’s have a look at the list of 5 best mobile phones under 50000 in Nepal.

Best Mobile Phones Under 50000 in Nepal:

Best Mobile Phones Under 50000 in Nepal:

The Samsung Galaxy A52s 5G  stands out as the best mobile phone under 50000 in Nepal. The handset is powered by the Qualcomm Snapdragon 778G 5G chipset. It is paired with either 6GB or 8GB of LPDDR4 RAM and 128GB of internal storage. Similarly, the phone ships with Android 11 out of the box with One UI 3.1 skin on top. It gets fuel from a decent 4500mAh battery that supports 25W fast charging.

The handset is featured a 6.5-inch Full HD+ Super AMOLED display that supports up to a 120Hz refresh rate. Likewise, it comes with IP-67 certification for water and dust resistance which is rare in other brand smartphones at a similar price. Its quad-camera setup consists of a 64MP primary sensor (OIS), a 12MP ultrawide lens, and a pair of 5MP macro and depth cameras. Similarly, it has a 32MP selfie camera inside the punch hole.

After the price drop of the Samsung Galaxy A52s, Samsung Galaxy M52 5G has slipped to 2nd position in the list of best mobile phones under 50000 in Nepal. Now, let’s start with the performance, the device packs a Qualcomm Snapdragon 778G chipset. In Nepal, Samsung Galaxy M52 is available in two memory configurations: 6/128GB and 8/128GB model. Furthermore, it has a 5000mAh battery that supports 25W fast charging.

The phone comes with a 6.7-inch Full HD+ AMOLED display with a punch-hole design. It supports up to a 120Hz refresh rate and up to a 240Hz touch sampling rate. Talking about the cameras, there is a triple camera setup on the rear side. It has a 64MP main sensor with an f/1.8 aperture. It is accompanied by a 12MP ultrawide lens with a 123-degree field of view. At last, there is a 5MP depth sensor for capturing depth data. Upfront, it has a 32MP selfie snapper.

Probably, Poco F3 is the best gaming mobile phone under 50000 available in Nepal right now. With its powerful Snapdragon 870 chipset, it runs some graphics-hungry games like PUBG without any major frame drop. Also, we didn’t find any major heating issues during our testing period. Moreover, it comes with 6/8GB RAM where the 6GB RAM model gets 128GB storage while the 8GB model has 256GB storage.

Around the front, the phone sports a 6.67-inch Full HD+ AMOLED display that supports a 120Hz refresh rate. It is an HDR10+ certified display that goes up to 1300 nits of brightness. Likewise, you get a triple camera setup. The setup has a 48MP main shooter with an f/1.8 aperture. For taking ultrawide shots, it features an 8MP ultrawide lens with a 119-degree field of view. At last, there is a 5MP macro camera for taking macro shots.

On the software side, the device comes with Android 11 out of the box with MUI 12.5 on top. Likewise, it packs a 4520mAh battery that supports 33W charging. According to the company, the 33W adapter charges the phone from 0-100% in just 52 minutes. Moreover, it features a fingerprint scanner embedded at the power button, IR Blaster, and stereo speakers.

OnePlus Nord CE 2 5G is at number 4 in the list of best mobile phnoes under 50000 in Nepal. The phone was recently launched in Nepal as the successor to the original OnePlus Nord CE. It has a 6.43-inch Full HD+ AMOLED display that supports a 90Hz refresh rate. Similarly, it comes with a punch-hole design at the top left corner that encloses a 16MP selfie camera. At the back, you get a 64MP main camera, an 8MP ultrawide lens, and a 2MP macro camera.

Under the hood, the OnePlus Nord CE 2 5G packs a MediaTek Dimensity 900 5G chipset. It is a 6nm-based chipset that features 2.4Ghz of maximum clock speed and Mali-G68 MC4 GPU. Similarly, you get 8GB of RAM with 128GB of expandable storage. It runs on Oxygen 11 based on Android 11. Furthermore, it has a 4500mAh battery that supports 65W charging and it also supports reverse charging via a Type-C port.

At last, we have the Realme 9 Pro+ 5G in our list of best mobile phones under 50000 in Nepal. It is the first Realme phone to feature OIS in Nepal. It has a 50 MP main sensor at the back that comes with OIS and an f/1.8 aperture. The main sensor is followed by an 8MP ultrawide lens that captures photos having a 119-degree field of view. Completing the setup is a 2MP macro camera. Likewise, The device features a 6.4-inch Super AMOLED display with a punch-hole design that packs a 16MP selfie camera. It supports up to 90Hz refresh rate and up to 360Hz touch sampling rate.

Realme 9 Pro+ 5G is powered by MediaTek Dimensity 920 5G chipset based on 6nm technology. It comes with an octa-core CPU with 2.5GHz of peak frequency and Mali-G68 MC4 GPU. Likewise, the phone is available with either 6/8GB RAM paired with 128GB internal storage. Talking about the software, it runs on Android 12 with Realme UI 3.0 on top. Fueling the handset is a 4500mAh battery that supports 60W fast charging.

BTW, What’s your list of the 5 best mobile phones under 50000 in Nepal? Let us know through the comment section below.