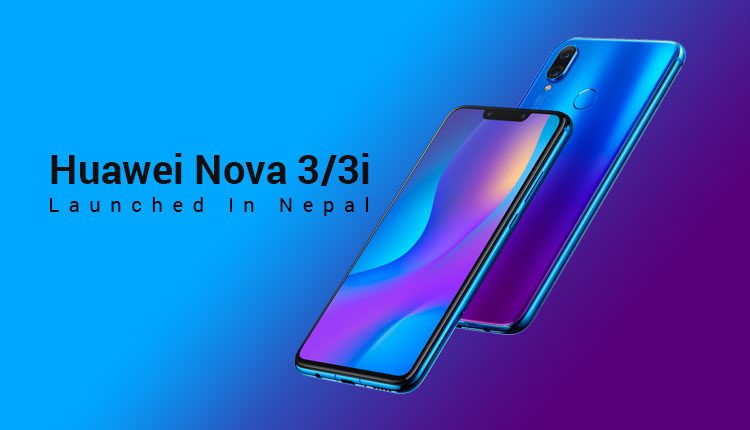 Huawei Nepal launched Nova 3 and Nova 3i, the most awaited upgrade to its “best selling” smartphone, Nova 2i. Nova 3 is the high-end version with Huawei’s best processor for now: Kirin 970 whereas Nova 3i has the latest mid-range processor: Kirin 710.

Both these phones come in great colours and curved glass with a notch. Nova 3 has a 3D curved back whereas 3i has a 2.5D curve. Nova 3 is surprisingly lighter than 3i even though it has a bigger battery.

Both these phones have a large 6.3-inch display, which is good to watch videos and multi-screen usage. They have a Full HD+ IPS LCD  display with a resolution of 2280×1080. LCD displays are good and have better sunlight viewing because of it’s brightness. But they have a NOTCH, which is Notch-a-good decision.

Nova 3 has a bigger 3750 mAh battery with fast charging whereas Nova 3i has a smaller 3340 mAh battery. Since both devices are powered by 10nm and 12nm power efficient processor respectively, both of them should be good enough for a day in moderate usage.

Both these phones have  Android 8.1 Oreo with EMUI 8.2 on top. They also have Camera AI capabilities along with AR features. They also support 3D emojis called Qmoji (inspired from Apple’s Animoji).

Huawei claims these phones to be the world’s first 24MP* four AI camera phones in Nepal. Nova 3 has a Rear Dual 16MP RGB camera with f/1.8 aperture and 24MP monochrome camera with f/1.8 aperture, Nova 3i has a rear dual 16MP with f/2.2 aperture +2MP depth-sensing camera. Both these phones have the same front-facing dual camera setup with 24MP + 2MP depth-sensing camera.

Let’s look at the side by side comparison of the phone:

Nova 3 will cost NRs.58,900 while the Nova 3i will cost NRs.38,900. The prebooking for these phones has started from today until August 12. The phone will be delivered to you after that only.

You can prebook on Daraz or respective retail outlets. There are some prebooking gifts available as well. A portable photo printer for Nova 3 and a cool Bluetooth speaker for Nova 3i.

Redmi K20 Pro Gets A Price Cut In Nepal