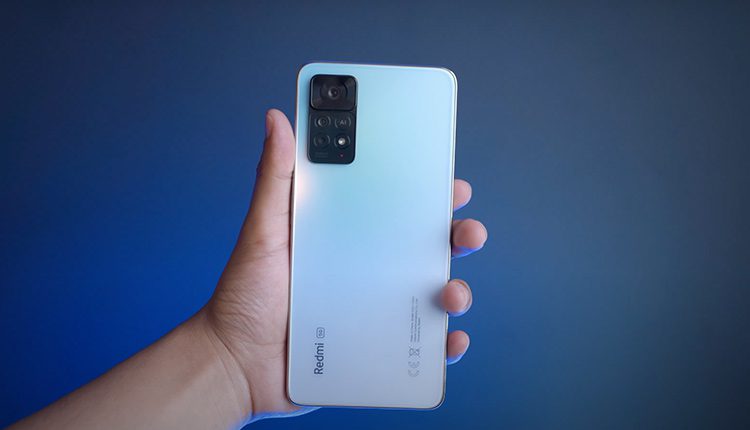 Xiaomi is among the most popular smartphone brands in Nepal. Xiaomi devices are always known for their excellent price to performance ratio. Among all of their devices, the Redmi Note series is the one loved by their Mi fans the most. One such device in the Note series, Redmi Note 11 Pro 5G was recently launched in Nepal. Since its launch, I along with my teammates have been using the device thoroughly. This will be our full review of the Redmi Note 11 Pro 5G.

Redmi Note 11 Pro 5G brings a flat side design similar to what Apple does with their iPhones. Due to this, you get an entirely different in-hand experience when comparing it with the last year’s Redmi Note 10 Pro. The device felt easy on the hand and despite weighing just above 200gm also the weight distribution is commendable.

Talking more about the build, on the front, Redmi Note 11 Pro 5G is protected by Gorilla Glass 5, and throughout my usage, there were no marks or scratches on the display. The device is also IP53 rated for dust and splashes, which gave me a little sense of assuredness while using the device during my review period.

The buttons are quite clicky and tack-tile too. Below volume rockers on the right side, we get a power button which also doubles as a fingerprint sensor. The performance of the fingerprint sensor is also quick and reliable. On the top, we get a 3.5mm jack, an IR blaster along with a speaker. Redmi Note 11 Pro 5G supports a stereo speaker setup with dedicated speakers on top and bottom. I will share my thoughts about the speakers later. The bottom of the device gets a speaker, primary mic, sim-card tray, and a Type-C port.

Redmi Note 11 Pro 5G features one of the best displays among the device currently on the market under a similar price bracket. Currently, in the market, even brands like Samsung are going with TFT LCD displays while Xiaomi has provided 120Hz AMOLED on their latest offering. This 6.67-inch display coupled with a 120Hz of refresh rate provided a smooth experience, and let me navigate through the UI of scrolling the web.

Though I did face some jitter while scrolling in social media apps but it’s not a deal-breaker. As this is an AMOLED panel colors were reproduced accurately. Under the display settings, you get options for changing the color profile between Vivid, Saturated, and Standard modes. While I used it mostly under standard mode. The display was easily visible under the sunlight too as it supports 700 nits of typical brightness and can go up to 1200nits.

The device also has support for the always-on display functionality. Under my testing, I also found that Redmi Note 11 Pro 5G can stream HD videos via OTT platforms like Netflix and Amazon Prime. Though, unlike its successor, Redmi Note 11 Pro 5G does not support HDR playback. So if you are fond of viewing HDR content then your content consumption experience might not be as you expected. Overall, I would say, the display on the Redmi Note 11 Pro 5G is among the best displays on the devices under NPR.40,000 in Nepal.

On the Redmi Note 11 Pro 5G, we get a 108MP Primary camera along with an 8MP ultra-wide and a 2MP macro shooter on the rear. While the front camera on the device is a 16MP shooter.

During normal daylighting conditions, the main sensor captures a good amount of detail and dynamic range. But during my testing, what I found was, that the camera is not very consistent. Sometimes the exposure or the colors turn out to be completely different even when compared to the images taken just prior to that. Other than that, the contrast and white balance are maintained quite nicely.

Talking about ultra-wide images, compared to the primary camera they lack sharpness and details. Though I didn’t see much of a color shift while capturing landscape images, which is nice. I won’t say these are really good ultra-wide images at this price point but they get your job done for regular social media uploads. Next here is a 2MP macro shooter, which is a downgrade when compared to the 5MP sensor on the last year, Note 10 Pro. Just like any other macro sensor, they lack details and sharpness. Also, the colors are pretty washed out.

The 16MP front-facing camera follows a similar story. Under good lighting conditions, it can produce vibrant colors and details and struggles badly under low light. Sometimes during harsh sunlight, the images are over-exposed though turning on the HDR mode fixes the image to some extent.

Redmi Note 11 Pro 5G is powered by Snapdragon 695 SoC with 6/8GB RAM. This is a 6nm SoC that brings improvement in the CPU compared to its predecessor while the Adreno 619 GPU is very much similar to the last year’s 618 on the Note 10 Pro and does not bring any noticeable performance boost.

In my usage, I was pretty much happy with the performance of the Redmi Note 11 Pro 5G. The Snapdragon 695 is not the best that you can currently get on the market. But for day-to-day life usage, general surfing, and browsing through social media apps Redmi Note 11 Pro handles it like a champ.

Now, talking about gaming in Redmi Note 11 Pro 5G, we tried some of the popular titles like Call of Duty and PUBG Mobile. Though the device is not oriented toward the gamers, if you are someone who plays games casually then the device can handle games decently well but not more than that.

Moving to the COD, the device was able to push 60fps constantly. Under the High graphics setting, you can choose the Max frame rate, which will provide you an average of 59.3 fps with CPU usage reaching 14.7% and devices reached till an average temperature of 47℃. Talking about PUBG, the device can push Ultra Frame rate(40fps) under balanced settings and High frame rate under HD graphics. During our testing, under Balanced graphics and Ultra Frame rate, we got an average of 39.7 fps with less to no strutters. While the devices reached up to 51℃ after a few gaming seasons. So, this proves Redmi Note 11 Pro can game but if you are into competitive gaming or in a search for a gaming device, then you should look for something with an 800 series of Snapdragon SoC or flagship Dimensity processors.

If you are here for the benchmark scores, during our ANTUTU test we got 386625 total scores. While on the GeekBench 5 we got a single-core score of 684 and a Multi-core score of 1949. These scores are a bit less than the Samsung Galaxy M33 5G, but due to the better optimization of Snapdragon 695, you get a better gaming experience on the Note 11 Pro 5G.

On the software front, Redmi Note 11 Pro 5G still runs on Android 11 with MIUI 13 on top. This is really a bummer as we are just around the corner for Google Keynote for the launch of Android 13 and brands like Xiaomi are still pushing devices with Android 11. Also, the update situation is not very clear and we don’t know how many Android updates will the Note 11 Pro 5G get. Apart from that, the software was pretty stable.

During our usage, we didn’t encounter any major bugs throughout the UI, though you might some minor lags and stutter sometimes. Talking about ADs and bloatware, you might see some ads now and then but it has been improved a lot than a few years ago. The device comes with various pre-installed Apps and Games but most of them are un-installable so there’s nothing to worry about.

Redmi Note 11 Pro 5G features a 5000 mAh cell with support for 67W fast charging. On a good note, Xiaomi is providing the 67W fast charger in the box itself. When even the mainstream brands like Samsung are seen removing chargers in their recent mid-rangers kudos to Xiaomi for their move.

Talking about battery life, The Note 11 Pro 5G can easily provide you a full day of usage under heavy usage too. At night my screen on time would be 7 hours+ with still some juice left. On top of that, the 67W charger provided in the box can easily top up the battery fully from 0-100% in around 45-50 minutes.

As I told you earlier, Redmi Note 11 Pro 5G features a stereo speaker setup with support for Dolby Atmos. The volume is really loud and crisp. But during my usage, while listening to some titles I found the sound to distort a bit under full volume. But for regular streaming and listening the speakers are pretty good on the Note 11 Pro 5G. You also get a 3.5mm headphone jack so you can always plug in your favorites earphones or headphones while gaming.

Redmi Note 11 Pro 5G is a solid offering from Xiaomi. It checks almost most of the boxes to be a good mid-range device. It has got one of the best displays in its price segment. Also, the Snapdragon 695 is a tried and tested processor. Still, Xiaomi has room for improvement in its cameras and also the software department. Features like 67W fast charging, IP rating, and dual stereo speakers make it stand out from the crowd.