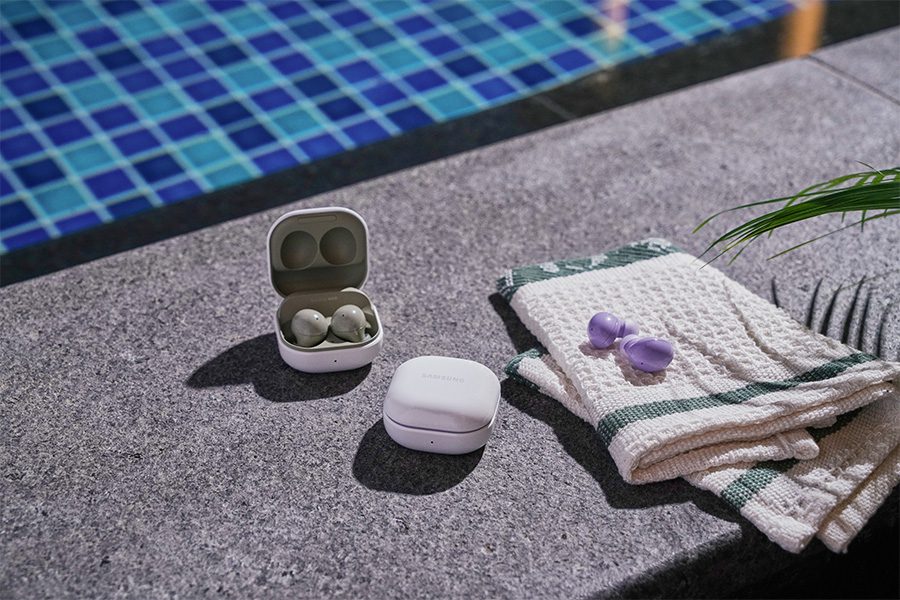 Samsung Galaxy Buds 2 brings a design somewhat similar to its more expensive sibling, the Buds Pro. It has a compact box available in four different colors. Both buds and the cases are quite lightweight and compact, weighing around  41.2gm and 5gm respectively. The buds are equipped with a triple microphone array resulting in impressive active noise cancellation while listing audio or making calls.

Apart from Active noise cancelation we also have the option for Ambient mode which lets you listen to what’s going on in the surrounding via the microphone on the buds. For all the controls and EQ settings, Samsung provides a dedicated section on their Wearable app where you can manage all the modes, customize the touch gesture, and more. Samsung has also stated that a dedicated app for PC will be launched for the buds to control noise cancelation and EQ.

Now let’s talk about the battery, here with the buds we get a 61mAh battery on each bud, while the case packs 472mAh cells. With typical use buds can give 7.5Hr of use with ANC OFF and with ANC ON you can get somewhere around 5Hr of usage and the case can charge the buds 3 times resulting in 29Hr of usage with ANC off.

The Galaxy Buds 2 has been launched in Nepal along with the folds on the 5th of September. The official price of Samsung Galaxy Buds in Nepal is NPR. 17,999.

OnePlus announces its merger with Oppo