Built & Design  – Compact & Light but with a trade-off

First thing first, Samsung Galaxy S21 is perfect for one-hand use. At the front, we get a 6.2-inch display, about which we will talk in a while. Here we get a dual-sim slot, but we lose out on the expandable storage here, unlike last year’s model. We have a triple camera setup at the back, which houses on that new design of the camera hump, which melts with the frame. And and and, the back is plastic. Yes, we have Gorilla glass Victus at the front, Aluminium frame but a plastic back.

Talking about the in-hand feel, the device was quite light and had a perfect fit in my big hands. The 6.2-inch display was perfect for one-hand use, and 7.9mm of thickness is like a cherry on a top for someone with small hands. But, the plastic back takes it all. Like any other Samsung flagship, S21 is IP68 dust and water resistance, which is always good to have. 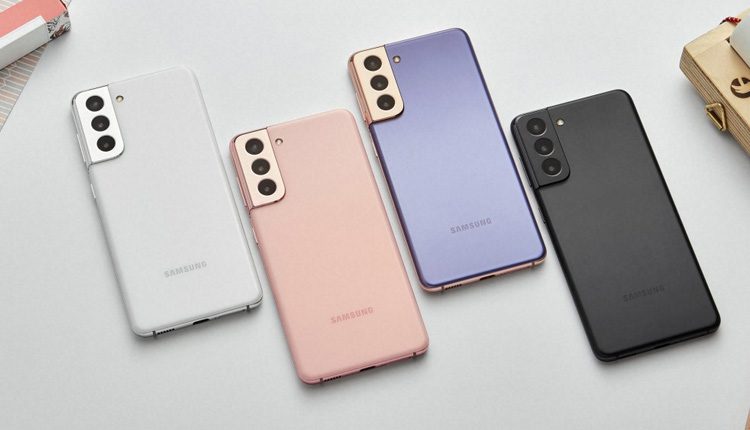 The smartphone doesn’t feel like a device over a lakh; moreover, it is like the cheaper Galaxy S20 FE, which was launched last year. Though the matt finish tries to cover up things at the end of the day, plastic is plastic. A good thing is it helps to reduce the weight of the device to just 171gm, even with a 4000mAh battery.

Display – Upgrade or a downgrade?

At the front, Samsung Galaxy S21 has a 6.2- inch Dynamic AMOLED 2X display with a 120Hz refresh rate. It has support for HDR10+ with a max brightness of 1300 nits. The display is protected with Corning Gorilla Glass Victus front and is a flat panel with no curved edges.

Before you tell me, isn’t the 1080P panel, a downgrade over the Galaxy S20, yes it is, and the last time we saw the FHD display in a mainline ‘S’ series flagship device was with Samsung Galaxy S5. Samsung makes the best quality displays in the industry, and the one on the S21 is among the best 1080P panels in any smartphone. We get a 120Hz refresh rate, which can dynamically adjust between 48Hz to 120Hz depending on your content, and we also have all the perks of an AMOLED display.

We get two different color modes in the display settings, vivid and Natural. The vivid mode gives you a slider to choose between warm and cool color tones. While under Natural, you get to tinker with the sRGB colors of the display. The display has inky blacks and rich and vibrant colors. It was a joy to use this display. While playing videos from Apps like Netflix or Youtube, the native HDR supports made the experience more immersive. The 120Hz refresh rate is like icing on the cake. While navigating throughout the UI, scrolling web or social media apps, or playing high fps games, you can feel the smoothness. Overall, I was happy with the display of the S21, and downgrade to 1080P is not a deal-breaker.

Looking at the specs sheet, you won’t find much of a difference from the last year’s model as all the special treatment is made to the big brother, the S21 Ultra. Nevertheless, we have a capable triple camera setup at the back with a 12MP f/1.8 primary camera with Dual Pixel PDAF and OIS. Along with that, we get a 64MP f/2.0 telephoto camera that can shoot 1.1x optical zoom and 3x lossless zoom shots. Whereas at the front, we get a 10MP f/2.2 shooter with Dual Pixel PDAF.

Regular shots with the primary camera come out quite well. Like every other Samsung camera, the colors were punchy and vibrant. The camera was able to maintain the dynamic range and white balance quite well. You can look at these shots of the temple. The color was shown as they were. Simultaneously, the close-up shots were able to create a natural depth of field with a blurred background. Talking about the low light shots from the primary shooter, it does a nice job of bringing out a bright image with less noise. While turning on the Night mode enhances the shots even further.

These night images of Bouddha stupa were shot after the sunset, and we have little to no noise in these pictures. Talking about the ultra-wide, the images try the maintain the same color profile as the main one. The wide-angle shots would lack a bit of sharpness if you checked them by cropping in after the image was taken.

Talking about Zoomed shots in Samsung Galaxy S21, it’s quite good but not something to praise. As we have a 64MP shooter with 1.1x, the camera does some software tricks to produce 3X lossless zoomed images, which were decent. Unlike its big brother, the S21 Ultra, S21 falls far behind in Zoom capabilities. However, the 1.1X optical zoom provided a nice frame while taking portrait images.

For video capabilities, Samsung Galaxy S21 can also shoot up to 8K at 24fps, but only through the telephoto camera. The footage is cropped a lot and without OIS, so not very useful. Other than that, the regular 4K@60fps videos were quite stable with the OIS, and Samsung has improved the ISP, which resulted in improved video quality and tons of features in the camera app. The device can shoot 8K@24fps, 4K@30/60fps, 1080p@30/60/240fps, 720p@960fps. Also, the portrait video option was quite improved compared to last years S20’s.

Samsung’s camera app packs a ton of features. The recently included Director’s view allows you to record from both front and rear simultaneously and allows you to change the lenses seamlessly. Other than that, features like PRO Photo/video mode, Night mode, Hyperlapse, AR doodle, and Panorama were also quite useful throughout my time with the device.

In our region, the Samsung Galaxy S21 comes with Samsung’s all-new Exynos 2100 SoC. This is a 5nm SoC build with Arm-Cortex cores architecture instead of Mangoose. It’s an octa-core Chip with 1×2.9 GHz Cortex-X1 & 3×2.80 GHz Cortex-A78 & 4×2.2 GHz Cortex-A55 cores. Talking about the benchmarking scores we got, a single-core score of 1082 and a multi-core score of 3470 on Geekbench 5, and on Antutu, we got an overall score of 604313. Keeping this synthetic benchmark aside, let’s talk about real-life performance.

As it is a flagship device, the performance was not a problem here. The Samsung Galaxy S21 can handle anything available on the play store with ease. On top of that, the 120Hz high refresh-rate display makes everything smooth and snappy. With the all-new SoC and this display, you will enjoy using Galaxy S21. Along with that, we get 8GB LPDDR5 RAM and 256GB, UFS 3.1 storage.

Talking about the device’s gaming performance, games like demanding games like PUBG Mobile, COD, Asphalt 9 all run without any hiccups. During the gaming sessions, the device might get warm, but there’s no such issue as over-heating with the Exynos 2100. Inside PUBG, the device was providing Extreme Frame rate under smooth graphics and maxed out at HDR Graphics and Ultra frame rate. We would love to see support for 90fps gaming as both the display and SoC can easily handle that.

So, the Samsung Galaxy S21, with its all-new Exynos 2100, performed well and was improved a lot than the last year’s S20 with Exynos 990. We have to see how it stands out with the other devices or its own Snapdragon 888 variant.

Battery and Charging – One full day with ease

Samsung Galaxy S21 packs a 4000mAh battery inside and supports 25W quick charging. Though from this time, we don’t get any charger inside the box. The device also supports 15W wireless charging and 4.5W wireless power share to charge other devices.

With the 25W separately bought Samsung charger, the device took some were around 1 hour 20 minutes to fully charge from 0 to 100%.

Samsung Galaxy S21 runs One UI 3.1 on top of Android 11. Samsung’s One UI has improved a lot, but there are few things to be improved, like the number of bloatware is increasing on Samsung’s devices, which should be taken care of. The next one is Ads; system apps like Weather show top-banner ads, which is not something a user wants after spending 1 lakh 10,000 on a device.

Other than that, One UI is one of my favorite custom UI on Android. It is optimized for one-hand use, has good dark mode support throughout the UI, and also the Samsung Dex was improved and much more stable this time.

If you prefer Samsung and want a small flagship device with impressive performance and a Camera with a sleek design and willing to spend Rs. 109,999, then you can go for Samsung Galaxy S21, and you won’t regret it. Also, if you pre-ordered the device before the 5th of Feb, then you can enjoy tons of discounts and goodies from Samsung.

Samsung Galaxy S21 FE Review: A Jack of all trades but...

My Experience With Obi Worldphone SF1