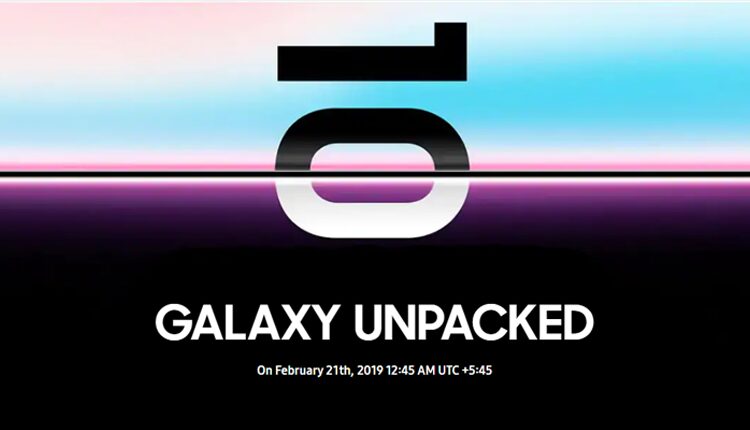 It’s about time and Samsung is holding its big Unpacked event on Feb 20. The unpacked event is where the latest flagship phones new innovations and products from Samsung gets revealed(unpacked). And of course with Giant company like Samsung, there are a lot of expectations and we might already know what’s coming, all thanks to the leaks. In this post, we’ve round up every rumor and leak about the event to give you a pretty good idea of what’s coming.

The Regular Galaxy S10 model will have a 6.1-inch display, curved, 19:9 ratio, 3,040 x 1,440 resolution. It will include 6GB or 8GB of RAM along with 128GB or 512GB of internal storage. Camera-wise it will have a triple rear camera and single front camera. The new feature includes In-display ultrasonic fingerprint sensor. For processing, it will include Latest Snapdragon 855 or Exynos 9820  based on region. The battery capacity will be of 3,400mAh.

Galaxy S10e is the cheapest and lowest variant of all. It is rumored to have 5.8-inch display, flat, 19:9 ratio, 2,280 x 1,080 resolution. 6GB or 8GB of RAM and 128GB or 256GB of internal storage. Camera-wise it will feature a dual rear camera and single front camera, Side-mounted fingerprint sensor(on power button), and 3,100mAh battery.

Samsung is planning to launch 5G with its devices but there are rumors that there will be a separate device with 5G and 1 TB of storage but all s10 devices may or may not include it. While Samsung may include support for the brand-new Wi-Fi standard. Samsung is also planning an exclusive premium phone including all these features.

Obviously, It’s not coming cheap. there has not bee the exact price revealed yet. Since there are a lot of variants of the S10, each with its own RAM and storage pricing will vary widely. For the lowest and Cheapest Samsung Galaxy S10e it might cost around $650. For the 6.3-inch model with 12GB of RAM and 1TB of storage, it may be over $1500. While there could also be a ceramic version which even costs more below image shows some available color variant while we can’t say much about the price

Samsung one Ui has already been revealed. It’s a revised Ui from Samsung to make usability easy in a taller device such as Samsung Galaxy S9,10 and Note series. In this event, it may go official and get rolled out to all High-end Tall form factor devices and New Galaxy lineup may come with One Ui included on the box.

Samsung is keeping the headphone jack don’ get confused but it will also be launching a new Bluetooth earbud. AKA the “Galaxy Buds” is Samsung Wireless Bluetooth Earbud with the capacity to get charged wirelessly. The S10 will be able to wirelessly charge earbuds or other device using a technology called “PowerShare.” It is a similar feature as reverse charging that Huawei Mate 20 Pro has.

Samsung is planning to launch the Gear watches as well and it has been leaked on their own app. Samsung will be launching the Galaxy Watch active and Galaxy Fit / Fit E fit band. Not much Info Is available for these devices

While Samsung teased the phone during the Samsung Developer Conference, They showcased an Infinity Flex display along with a prototype. But actual design and names were unknown. We still don’t have many details about it for now We know It will be named Galaxy Fold and I will be Expensive. Samsung is teasing that a reveal of the device will occur during the Samsung Galaxy S10 event. This could be where we finally see the actual design of the foldable phone. While we do have some pictures/video that shows the possible design.

Here’s a video that features a foldable phone from Samsung:

It’s time to conclude and while we are at it don’t forget to take a look at this teaser leaked from Samsung we have also talked about it and prepared a short clip do watch it:

Facebook
Twitter
Pinterest
WhatsApp
Previous articleNova 4 Is launched In Nepal With Pinnhole Display – Did it hit the spot ?
Next articleSamsung 10 Years milestone with Unpacked Event: S10, S10 Plus, S10e, Fold, and More Launched