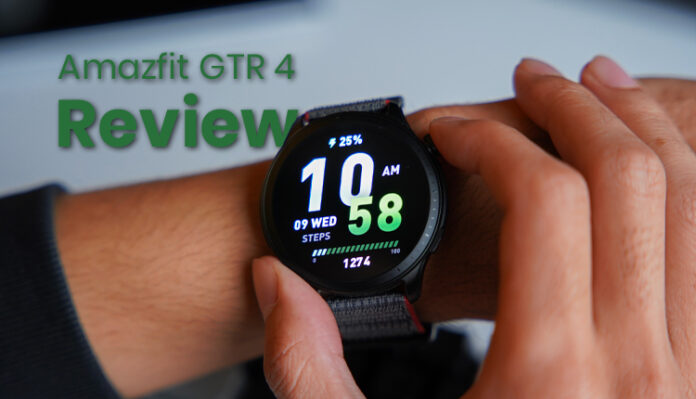 Amazfit is one of the most popular smartwatch brands which is based in the USA and is owned by Zepp health. The Amazfit brand recently announced Amazfit GTR 4, Amazfit GTS 4, Amazfit band 7, Amazfit T-Rex 2, and Amazfit Falcon worldwide whereas in Nepal we can find Amazfit GTR, GTS, band 7, and T-rex 2. The two Amazfit smartwatches GTR and GTS are very similar in specification with few differences. So in this article, I will share my in-depth experience with the Amazfit GTR 4 along with a full review of the smartwatch including specifications.

Talking about the first impression of the Amazfit GTR 4 it looks premium and sporty with the circular aluminum alloy body. Furthermore, there are various strap options available for Amazfit GTR 4 whereas the smartwatch we have comes with a Race track grey nylon strap. Moreover, the smartwatch comes with a scrollable crown that also acts as a button whereas we can find a dedicated physical button on the side of the smartwatch.

Amazfit GTR 4 features a round display with 1.43 inches AMOLED screen along with a resolution of 466*466 pixels. As per my experience with the smartwatch, its display has vibrant colors and sharp text whereas its large display makes reading text and information on the smartwatch easy.

In the outdoors I found the display of the Amazfit GTR 4 decently bright for reading information whereas the smartwatch also features auto-brightness. In addition, talking about auto-brightness the Amazfit GTR 4 works seamlessly to increase or decrease the brightness in bright or dark environments. Furthermore, the smartwatch also comes with an always-on display which can be scheduled for a certain time of day and raise to wake feature.

For me, one of the most used workout features was Outdoor running where the smartwatch tracks training effects, distance, average pace, workout duration, calories, heart rate, and more. Whereas the smartwatch also features advanced running such as track Run mode, Virtual pacer, and smart trajectory correction.

The Amazfit GTR 4 smartwatch is powered by Zepp OS 2.0 which is very similar to its other Amazfit smartwatch and its predecessor Amazfit GTR 3 whereas the smartwatch connects to Zepp App for accessing detailed information on health, and customizing face and settings.

Furthermore, as the smartwatch runs on a Zepp OS therefore we can’t find a wide variety of applications to choose from, unlike the android smartwatch but I personally find the choices of applications available in the Amazfit GTR 4 such as voice memo, to-Do, Alarm, weather and more enough for my day to day tasks.

As the Amazfit Smartwatch GTR 4 is capable of calling and receiving phone calls through the smartwatch it features a microphone and speaker which is decently loud.

Furthermore, as per my experience, I was able to make calls clearly even in noisy background areas and had no issue hearing the other person on the phone call with the smartwatch.

Furthermore going in-depth on my battery uses a normal condition would look like tracking my outdoor running workout, checking notification updates, and receiving a few calls through my smartwatch whereas I use to mostly wear the smartwatch all day even while sleeping.

Furthermore, with the latest update on the Amazfit GTR 4, you can import your own route file for real-time navigation and track your real-time movement on the smartwatch whereas the smartwatch also suggests the shortest straight line back to the starting point.

The Amazfit GTR 4 is a premium smartwatch by Amazfit which offers excellent built quality with various different strap options to choose from such as Race track grey nylon strap and more. If you have used other Amazfit smartwatches in the budget range then you can find a haptic motor on the crown, call receiving feature, Route import, and other features new on this premium smartwatch.

BTW What are your thoughts on the full review of Amazfit GTR 4? Do Comment Below

Amazfit T-Rex 2 launched in Nepal with a bigger battery & display with improved GPS.

November 21, 2022
The Amazfit GTR 4 is one of the premium smartwatches from Amazfit which comes with excellent built quality and amazing battery life. Therefore if you are in the market looking for a premium smartwatch with a few bucks spare than I would hand down recommend this smartwatch.Amazfit GTR 4 Full Review: Smartwatch with a Premium Feature
© Gadgets In Nepal Pvt Ltd. | All Right Reserved
MORE STORIES