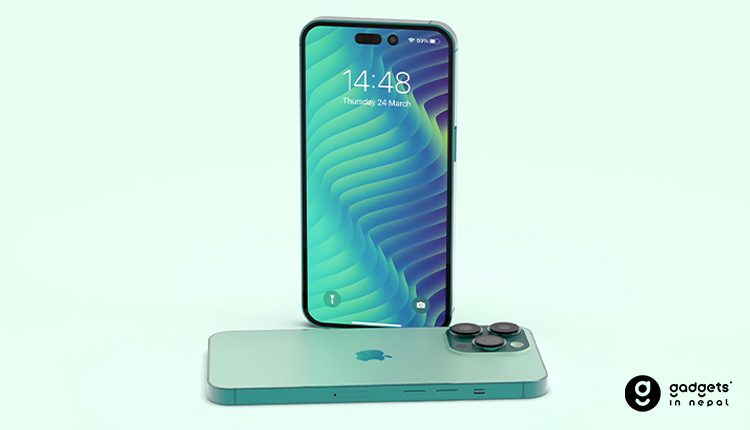 Apple always launches its flagship for the year usually in September. Last year’s iPhone 13 series was also launched on the 14th of September. There are still 4 months left for the launch of the iPhone 14 series. But we are constantly hearing new leaks and rumors for the upcoming iPhones. Today in this article we will be compiling all the rumors and leaks about the iPhone 14 Pro Max. We will also be discussing iPhone 14 Pro Max expected price in Nepal along with its launch date.

iPhone 14 Pro Max – Everything we know so far

As most of the leaks suggest this time with the Pro series of iPhones we will be getting a pill shape camera cut-out instead of a notch. You can look at the picture above, we see a dual cutout for face-ID sensors and a selfie camera.

Talking about the display, iPhone 14 Pro Max will have a 6.69-inch display over a 6.68-inch panel on the iPhone 13 Pro Max. It is a Super Retina XDR OLED display with a 120Hz refresh rate and support for HDR10, and Dolby Vision along with 1200+ nits of maximum brightness.

iPhone 14 Pro Max will be powered by the upcoming Apple 16 Bionic SoC. This is an unannounced Apple SoC that is expected to be fabricated under the 4nm process. Which will result in much better performance and efficiency. Along with this, we are expecting 8GB LPDDR5X RAM with up to 2TB of NVMe storage. If you look at the last year’s iPhone 13 Pro Max it had A15 Bionic SoC. It was a Hexa-core SoC with 2×3.23 GHz Avalanche + 4×1.82 GHz Blizzard CPU cores with a 5 core Apple GPU. Apple iPhone 14 Pro Max might launch with iOS 16 out of the box.

This time we might see the biggest camera jump from Apple after a long time. It was with the iPhone 6s when Apple switched from an 8MP sensor to a 12MP shooter. While with the iPhone 14 Pro Max we might see a 48MP camera sensor from Apple. This will also enable 8K video recording on the iPhone. Apart from the primary camera, ultra-wide and the telephoto lens will be 12 mega-pixel only.

As we reported earlier, we might get an autofocus feature on the front camera as well. Recent renders show a punch-hole design for the selfie camera that has a 12MP image sensor.

As the size of the phone is similar to that of the last one, iPhone 14 Pro Max might have a similar battery capacity to that of the iPhone 13 Pro Max. So, we will be getting a 4352 mAh cell. Though the charging should have some upgrades as brands are coming up with flagship smartphones featuring 80W, 120W, and even 150W of fast charging.